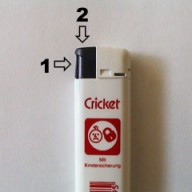 Jet flames of a height of up to 30 cm, inadmissible flaring of the flame, formation of cracks during the drop test as well as gas loss and explosions during the temperature test have been observed in a study of the Consumer Council. The ISO standard concerning safety of lighters, too, had significant shortcomings. The initiative of the Consumer Council in co-operation with other consumer organisations brought about a more stringent standard (e.g. with respect to temperature resistance).

A further working area was the development of a European standard for child resistant lighters. Originally only child panel tests were foreseen - as in case of testing of child resistant packaging. Later mechanical tests were introduced as an alternative option for piezo-electrical lighters.

References to both standards were published in the Official Journal of the European Union - i.e. compliance with these standards gives a presumption of conformity with the safety requirements of the General Product Safety Directive.

Smoking is hazardous to your health. Warnings like this are clearly visible on cigarette packages. Smokers using a disposable lighter may expose themselves to a considerable risk, too. This was the conclusion of a study of a total of 15 commercial disposable lighters carried out by the Consumer Council at the Austrian Standards Institute together with the Association for Consumer Information. It was commissioned and partly financed by ANEC, the European Association for the Co-ordination of Consumer Representation in Standardisation, in the year 2000.

Only 40 percent of the lighters tested in accordance with ISO 9994 complied with the requirements of the standard. For example, 4 products showed flame heights up to 30 cm. A maximum of 15 cm is permissible.

Six products failed the spitting, sputtering (a shower of burning droplets which separate from the main flame) and flaring (variation of flame height) test. Three products failed the drop test, and even three lighters did not even survive the elevated temperature test at 55°C. Overall, only six of the tested lighters could withstand the selected tests according to ISO 9994. The more severe extended test - comprising a temperature increase from 55°C to 65°C - was only passed by three products (all known brands). The results of the study were published in several European consumer magazines. The project report is available on the ANEC website as PDF, 527 KB.

The testers did not only find deficient products but also clear shortcomings of the standard ISO 9994 ("Lighters - Safety Specifications") as stated in the test report. Therefore a number of proposed changes were incorporated in the report and forwarded to the responsible working group of the international standardisation organisation ISO (ISO TC 61 WG 1 "Lighters"). The standard was under revision at that time. The consumer representatives succeeded in getting several changes approved.

In particular, the elevated temperature test has become significantly more stringent. The lighters will be heated to 65°C instead to only 55°C as was the case in the past. This led to a significant increase of the failure rate in the test and is of particular importance when a lighter is left in a car during summer. Temperatures of about 80°C are anything but rare in a parked car exposed to direct sunlight. With these changes of the Standard ISO 9994 the safety level established for disposable lighters could be remarkably increased. The formal vote took place at the end of the year 2001 and the standard was approved..

Apart from mechanical safety also child-resistance of lighters is subject of standardisation. Again this standards project is based on a mandate of the Commission. The background: numerous fires of apartments resulting in damage to property and injuries caused by children playing with lighters. For this reason legal regulations in the USA and other countries prescribe that disposable lighters may be placed on the market only provided they are child-resistant. Similar provisions were envisaged for Europe.

However, the standardisation project was initially blocked by the manufacturers. Their argument: due to insufficient surveillance by authorities there are numerous lighters on the market which do not even comply with the basic safety requirements of ISO 9994. Thus it was feared that additional requirements regarding child-safety might be ignored by manufacturers from the Far East resulting in a competitive disadvantage for producers of brands. However, as a result of the revision of the General Product Safety Directive standards were given a higher status - they became more compulsory.

Against this background discussions have taken place between representatives of the European manufacturers, the consumers, the Commission and the European standardisation organisation CEN. The result: manufacturers will be given a three years transitional period and will, in turn, agree to adopt the standard. The Consumer Council regreted the delay; it was, however, satisfied that the issue of standstill concerning the preparation of the standard could be resolved.

Importers of lighters from the Far East have tried until the end of the process to prevent the adoption of the standard. Even representatives of Chinese embassies became active in this sense in the whole of Europe. Nevertheless the standard (EN 13869) achieved a positive result at the formal vote in April 2002.

However, some CEN members questioned the definition of disposable lighters. In the meaning of the standard a lighter is disposable if it has an ex-factory price of less than 2 Euro. This criteria was chosen because it turned out impossible to find a technical definition. The restriction on disposable lighters was not considered useful by the consumer side anyway. It was justified by the fact that these products are often left carelessly and can get in the hands of children. Nevertheless it is not understandable why more expensive lighters must not conform to the same safety requirements.

Hence, consumer organisations have welcomed efforts of the Commission to drop the 2 Euro limit so that also luxury lighters have to comply with the standard. The responsible CEN committee initially shared this view and intended to put a revised version of the standard to a vote in autumn 2002. Strong opposition from manufacturers of expensive lighters was the result. However, the just adopted standard came also under fire from importers of cheap disposable lighters. Hence, there was a risk that all achievements were lost during a revision of the standard. Therefore consumer representatives declared themselves against a change of the standard.

Unfortunately also the Commission climbed down and postponed the intended publication of the reference to this standard in the Official Journal of the EU under the pressure of certain manufacturers, importers and some Member States for an undetermined period of time (apart from the 2 Euro limit also the child panel testing was subject of criticism). By such a publication the standard would have become obligatory. Precisely speaking a lighter conforming to the standard would have been considered as complying with the requirements of the General Product Safety Directive. In case of non-conforming lighters the manufacturer would have had to show that his product is nevertheless safe.

With a delay of several years the Commission adopted after consultation with the Member States a Decision (2006/502/EC) based on article 13 of the General Product Safety Directive (2001/95/EG) which prohibits the placing on the market of disposable lighters which are not child-resistant. In addition, lighters which resemble toys (novelty lighters) were banned. The decision has to be prolonged annually as the Product Safety Directive does not allow unlimited bans. The separation between lighters which are reusable and those which are disposable is nor really clear: the "expected" lifetime of reusable lighters shall be at least five years, a guarantee from the producer of at least two years shall be given, lightes shall be capable of being repaired and safely refilled over the entire lifetime, to this end an after-sales service centre based in the European Union shall be available.

Following extensive discussions the Commission has called for a revision of the European standard EN 13869. According to the further mandate which was given to CEN in July 2008 the definitions of the standard were required to be adapted to the ones of the Commission Decision, "novelty lighter" was to be replaced by another term and alternatives to the child panel tests - at least for some types of lighters - should be found. The first two items were executed quickly. The term "novely lighter" was replaced by "child appealing lighter". An "Amendment" of the standard was published in June 2011. Further, a study was commissioned on additional aspects - in particular, on mechanical tests as a replacement for child panel testing. The final report entitled "Study on Child Resistance Requirements for Cigarette Lighters" was presented in April 2013. According to this mechanical tests for lighters with piezo-electronic ignition mechanisms could be envisaged. The standard was changed accordingly and published in 2016.